We went to Luxembourg on a quick day trip. We visisted Luxembourg City and wandered all over the central district. I found a few garden stores and bought some exotic looking tulip bulbs as well as several packages of sunflower seeds. Both of us can speak a little French so it was fun using our French to order food or buy cups of coffee. In Luxembourg three languages are spoken: French, German and Luxembourgish. 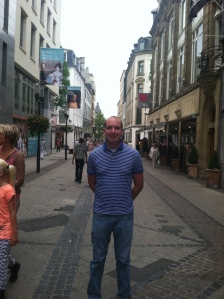 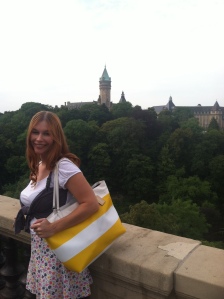 In the afternoon, our tour bus brought us to the Vianden Castle. This castle is monstrous and perched high on a hill. I learned a lot about the difference between Roman and medieval masonry. My husband was able to help me identify the subtle differences in the brick layers of the castle.

Apparently, Roman brick-laying is very orderly and neat and has an almost “perfectionist” quality to it. The brick laying method that came later—in the middle ages—was actually more disorganized and hap-hazard in appearance. By a rough glance, I can now distinguish between more ancient types of brick-laying (Roman) from more recent types (medieval masonry).

We walked through all the levels of the castle and noticed that there were various medieval displays in each section. One of the rooms was temporarily featuring the work of Otto Dix—an artist whom we both appreciate.  An entire room was dedicated to his series of 33 lithographs that depicted scenes of the Life of Christ per the book of Matthew—the Matthaus Evangelium—or, “The Story of Matthew”.

Pictures from our trip to Luxembourg and Vianden castle 🙂