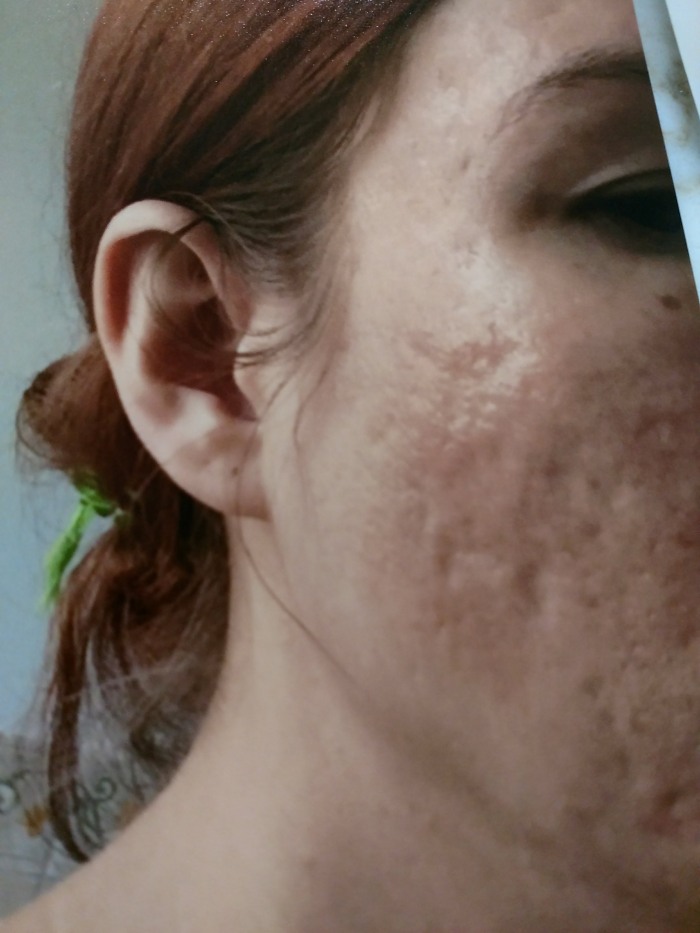 My BEFORE FRAXEL PICTURE–ABOVE. Acne scars on my skin. It looks the same way on the other side of my face too. And my forehead is terrible. My chin, is scarred the least. Yes, I’ve learned many “camera angles” and “makeup tricks” to help disguise this.

Sure, not anything to complain too much about here–there are children dying in other countries due to starvation,--but I did suffer intensely from rejection, bullying and hate throughout my childhood and teenage years. I know full well what it’s like to be discriminated against because of my skin–especially as a female. Your self esteem goes down. Your job opportunities go down. You have a harder time making friends…the list goes on and on. Acne is nothing. It’s the scars that cause the long-term (and short-term) difficulties.

I had my first Fraxel LASER skin resurfacing treatment this past Friday (Nov 17, 2017). It’s has been 3 days since my treatment and my face still looks pregnant. The swelling is intense! With the exception of the severe and constant cystic acne I experienced during my teen years, my face has never looked so deformed and disfigured in my life. I don’t mind the intense redness, it’s the inflammation—especially around the eyes—that causes the most grimacing from family members, even the baby. They have learned to put up with me these past few days and I have remained strictly inside the confines of the house. The Fraxel LASER is no joke. For me it has been several days of recovery.

After arriving at my LASER appointment Friday, the technician applied a thick layer of numbing paste over my skin. I had to wait for 1 full hour before my treatment began. Once numb, the technician came in and applied a device to my skin, somewhat like a scanner or wand, which was attached to a large LASER machine. She then carefully and thoroughly passed this wand over my face. She started at my forehead and proceeded to my cheeks and chin. I made sure to ask that my “nose be avoided” since I didn’t have any acne scars there and even more, wasn’t fond of the idea of a massively inflamed nose. I would highly recommend doing this if you decide to get FRAXEL. There is no need to experience a swollen nose for several days.

For me, the Fraxel LASER hurt quite a bit—especially at the beginning. I could feel bursts of fiery hot, almost searing pain with each pass of the LASER. As the treatment went on, my face started to adjust and I didn’t really feel the pain anymore. All I could think about was a LASER breaking down the fibrotic scar tissue and puncturing microscopic columns into the depressed scar tissue helping break it from its tethering to the underlying dermis. This brought me great joy! The LASER treatment took about 1 hr and 15 minutes.

The technician was very accommodating and wanted to help me in every way possible. I had purchased a discounted series of Fraxel LASER (face and neck) treatments and 1 Clear and Brilliant treatments for $1,359. She realized that my neck didn’t need the treatment as much as my face and decided to add 2 more Fraxel treatments to the series that would address my face only, replacing the neck treatments. This was extremely generous! SO now I get a total of 4 Fraxel sessions (next one is scheduled for January so watch out world) for $1,359. The actual market price for 4 Fraxel treatment sessions is around $3,200.

I will keep you updated on my progress and what I think about the results. I was told that it will take at least 4 Fraxel sessions to see any noticeable improvement to my acne scars–but I think I will see mild results with just one treatment. I look forward to future sessions and am willing to put up with the 3 days of recovery that follow this procedure.

Recently I was skimming over a blog post. A destitute blogger was discussing her plights and struggles in life. She began saying how it was the little things in life that brought her joy like starting her day with a rich, homemade cup of coffee and a pack of cigarettes.  I wanted to comment, “But isn’t it really the little things in life—the little day to day, inexpensive pleasures—not the big purchases—that give us ALL the most pleasure?”

One might say “Well, at least the rich have the constant buffer of financial security where the poor do not have this same sense of security.” This is true. But let’s also think of the word “rich” or “wealthy” as a set of moment to moment experiences that add up and affect one’s life.

Being monetarily rich comes with its own set of problems that take the mind away from the present moment and degrade the chance for contentment. The rich have a lot to lose. They might struggle to find peace in the moment because they must constantly be concerned about maintaining their money and status or worried about losing it.

According to the psychological literature, it is deeply embedded in the psyche to act in ways to “avoid loss”. In fact, humans tend to be more rigged towards avoiding loss than striving for potential gain—and the rich certainly have more to lose—so there’s that.

I also tend to think that the super-rich are inhibited from the enjoyable pursuits of creativity and ingenuity.  They have everything they could ever need or want so their minds are prevented from going down more industrious, creative paths. These creative paths are the exact things that produce flow—this “in the zone” sensation which produces a calm, relaxed feeling of wellbeing—a sustained pleasurable state.

Let’s also not forget that there are plenty of wealthy people who are (or were) unbelievably miserable. The late actor and comedian Robin Williams was one of them. There are plenty of Hollywood stars who live lives of persistent addiction, rehabilitation and shattered relationships but their bank accounts indicate they’ve accumulated a significant amount of wealth.

Wealth gives people the ability to smother themselves in constant sources of pleasure—constant dopamine rushes. They can indulge like gluttons on whatever piques their interest at any given moment. The down side is that they quickly acclimate to such heightened levels of excitement.  They inevitably set themselves up for a cycle of addiction sooner and more intensely than the rest of us—who can’t always afford the latest drug, prostitute, or designer outfit.

Financial wealth also presents another interesting feature—the diminishment of challenge(s).  How hard are you going to strive for something if you can instantly buy it? Of course, all challenges are a two-part package. The first part is where you are striving diligently towards your goal—working long hours, researching, networking, exhibiting patience, asking questions, chalking up lots of physical and intellectual labor. The second part is where you reap the rewards of your challenge, or, you learn something new that may catapult you in a new direction. When you are rich you are sheltered from both the challenge and the reward that come with difficult pursuits.

The point is perhaps wealth should not be thought of simply in monetary/financial terms, but really as an enjoyable/relaxed state that bequeaths a strong, trenchant sense of vitality for the life you are living. By this definition, Robin Williams was not wealthy. No` matter what our income or financial state, we can all experience wealth.

One of the things I was recently thinking about is that thanks to the internet and our ability to binge on entertainment or information—at all hours of the day—people in western societies are beginning to know what it’s like to have no limits. This is a form of wealth or freedom. But it also presents its own problems. You now are forced to think about how you are going to manage your time and make value judgements as to what is most or least important to spend your time on. Sure, this has always been an issue for humans—but even more with screens everywhere that give us access to anything, all the time.

Alright, so I digress. Happiness comes from having goals and pursuing them. It comes from having sufficient challenges in your life that you are in the midst of conquering. How do I know this? Once you buy that car or that house or you find that “dream job” your excitement will soon wear off and you will adjust to where you were before.  In other words, pursuing the challenge is where the happiness lies. Now go forth and pursue something slightly challenging today. You will be glad you did.

Well here goes…I’m writing again in this blog. I vow to be consistent this time. I’m like everyone else–a perfectionist. People always use the term “perfectionist” like they’re some kind of nearly extinct animal. They’re not. Everyone is a perfectionist in some area and a slacker in another.

I’m someone who doesn’t want to write “unless I’ve put forth my best work and effort” and so, I go from day to day, and month to month without bothering to scribble down a few lame, desultory thoughts for you to writhe and cringe about. And…when I really try, I’m sure your feelings are not much different. You probably can’t tell the difference either way. All of this blogging and vlogging that we all do is for ourselves and our own sanity.

I’ve got my crying baby boy in my lap. I’ve decided that I want to work on my self help book (a book I’m writing for myself but that I hope to sell in the future).  I’ve got over 19,000 words in this book so far!